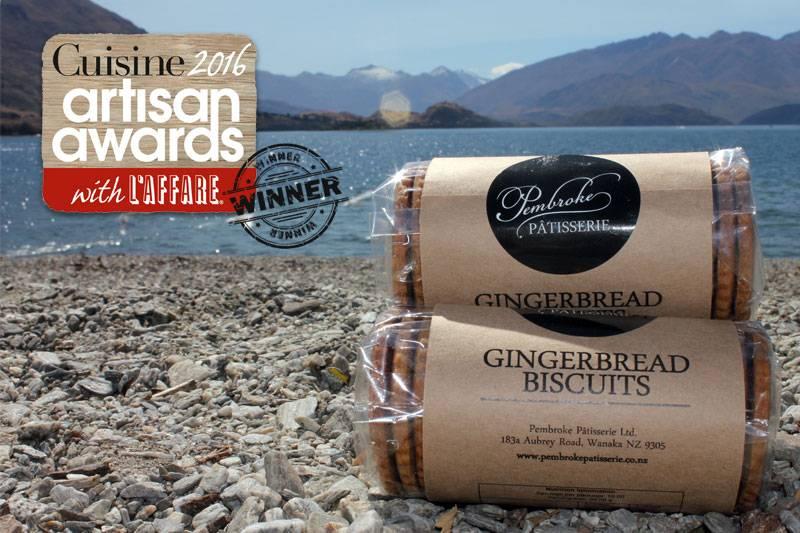 Posted at 01:18h in Pembroke Patisserie News by admin

We are proud to announce that we are one of the 10 winners of the Cuisine Artisan Awards 2016!

We were really excited to learn we’d been selected as winners for the Cuisine Artisan Awards 2016. Not only is it a huge honour, we have enjoyed reading Cuisine magazine over the years and have always followed the awards closely from a foodie perspective.

We are delighted to have won and be published in this magazine as it means that we can introduce so many people to us and our biscuits.

This year we have had many highlights – new stockists, a thriving local Wanaka Farmers Market and interest in our biscuits from all over New Zealand. We have been overwhelmed by how popular our Gingerbread biscuits have become and it is satisfying to see our hard work being recognised in this way.

It’s also been wonderful that we have been really busy with our stall at the Wanaka Farmers Market. We are very grateful for the continuing support from the Wanaka locals who visit us every Thursday – despite what the elements throw at us some weeks!

During 2015 we have been working on building new relationships with stores around New Zealand, and keeping up with baking at home in Wanaka.

In 2016 we are looking forward to continuing baking and introducing some new and exciting recipes for people to try.

It is an honour to be among the winners of the Cuisine Artisan Awards 2016 – congratulations to all the other winners!

WE ARE OPEN Friday 24th June

The patisserie will be OPEN throughout the long weekend, 8am-2pm.

*Home Delivery orders are not available Friday 24th June.
Pick up orders in store only.

We are closed for Queen’s Birthday

We are CLOSED on Monday, 6th June in observance of Queen’s Birthday.

There will be no online, cake or home delivery orders available
and the patisserie will be closed for the day also.

We will reopen on Tuesday 7th June at 7.30am
for all your pastry and coffee goodness.